Australian animals you should know about

There are so many interesting animals in Australia! Four out of five animals that live in Australia only can be found there.

Australia is a megadiverse country and is home to an extraordinarily high amount of plant and animal species. 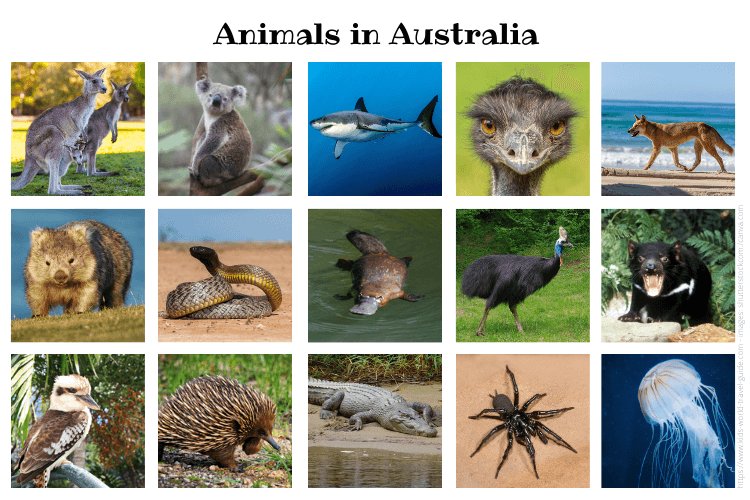 Among the endemic animal species - species that can only be found in Australia - are the monotremes, which are mammals that lay eggs! The platypus and two species of echidna are the world's only egg-laying mammals, so called monotremes.

Australia has almost 400 mammal species and about 140 species of marsupials. A marsupial is an animal that carries the young in her pouch.

Half of the birds that live in Australia, can only be found there. Among the typical Australian bird species are the kookaburra, the emu and the rainbow lorikeet, an especially colourful parrot which has a red beak and a multicolour plumage. 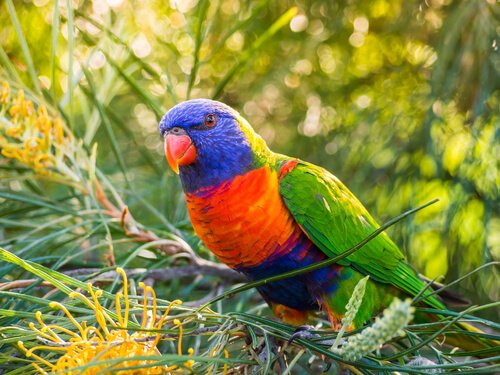 15 Animals in Australia you should know about

Koalas are marsupials. This means that they are mammals that carry their young in a pouch. They look like cute bears but koalas are definitely not bears! 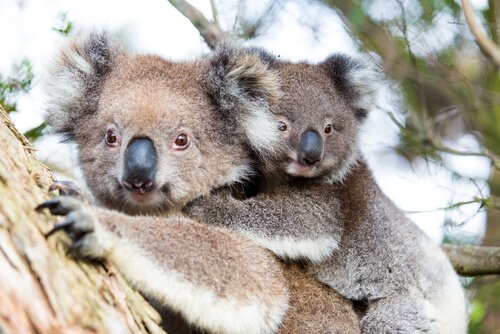 Koalas live in eucalypt forests along the eastern coastline of Australia. They are fragile animals but grow up to 80 cm/ 2.2 ft in height and weigh only about 14 kg/ 31 lbs. Baby koalas are called 'joeys' and hide in their mothers’ pouch for the first six months. Koalas eat lots of eucalyptus leaves (1 kg/ 2.2 lbs per day) and sleep up to 20 hours!

Dingos are the biggest carnivorous mammals in Australia. Carnivorous means meat-eating. They can be found all over Australia except for Tasmania although they mainly live in the country’s outback. A dingo looks similar to a domestic dog, but has a longer muzzle, larger pointed ears and sharper teeth. It has a brown furry coat and bushy tail. 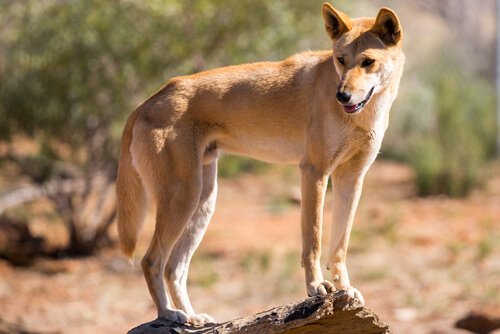 Dingos are wild dogs that feed mainly on small animals. Dingos stay alone, but during mating season the dingo is known to mingle with other wild dogs and to hunt in packs of three to twelve animals. 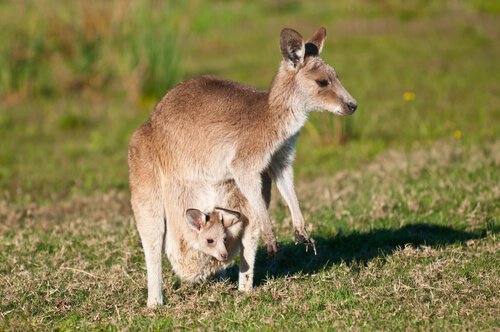 Wallabies are usually smaller than kangaroos but kangaroos come in all sizes. Some weigh only little and are tiny, others weigh up to 90 kg/ 198 lbs. In many rural areas, kangaroos roam in the bushland. One of the best places to experience kangaroos is Pebbly Beach, a four-hour-drive south of Sydney.

The platypus is one of the monotremes. The egg-lying animal lives along the river banks in burrows. The platypus has a brown furry body and webbed feet. With a bill like a duck as well as a tail like a beaver it looks truly unique. A platypus can grow up to 60 cm/ 2 ft in length. 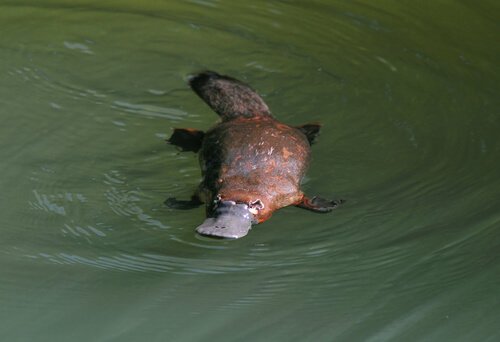 Platypus are very shy animals and quickly hide underwater if approached. If they are attacked and cannot flee, however, they inject poison through spurs in their hind legs. The poison is so strong it can kill a dog! 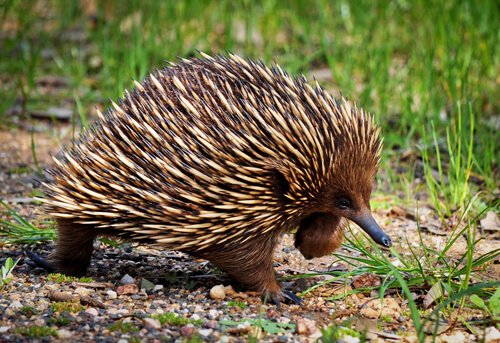 The echidna has spines on the body, which thus is covered with a prickly coat similar to a porcupine or a hedgehog. The monotreme has a long sticky tongue and eats mainly insects. When frightened, the echidna rolls into a small ball to protect itself.

Tasmanian devils are marsupials and carry up to four young. The young live in the pouch for up to four month. 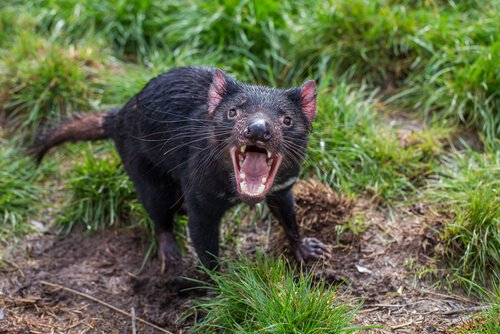 The black coated animal is as tall as a small dog, but very shy and the Tasmanian devil is nocturnal. Nocturnal means the animal is active during the night. Tasmanian devils are the largest carnivorous marsupials and have powerful jaws and teeth.

This bird is the world’s largest kingfisher bird and grows up to 46 cm/ 18 inches from beak to tail! The kookaburra is known for its chuckling voice which sounds like human laughter. Laughing kookaburras can be easily heard and thus easily be spotted. Click to listen to the kookaburra's call here. 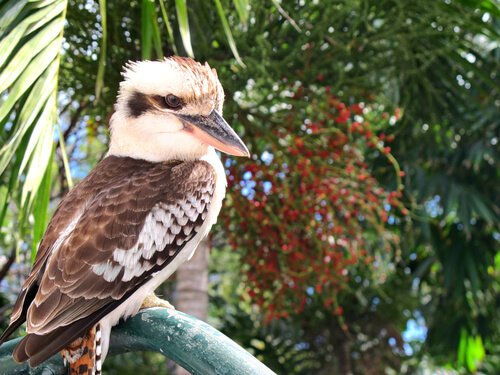 Another one of the native animals to Australia is the wombat. This burrowing animal can get really heavy and can weigh up to 36 kg/ 80 lbs. This is as much as a 10-year-old child weighs! 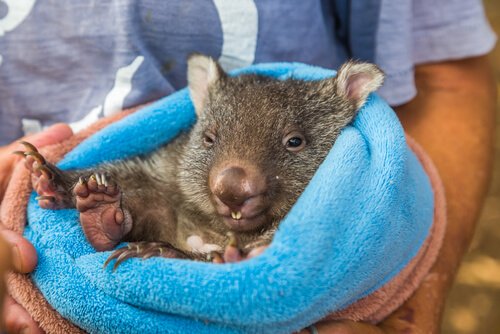 Wombats can quite commonly be spotted in the Blue Mountains National Park near Sydney. Wombats feed on grasses, tips of shrubs and bushes.

The emu is the tallest bird in Australia. It reaches up to 2 m/ 6.5 ft in hight and can run really fast, with speeds up to 50 kmh/ 31 mph. However, emus cannot fly, just like an ostrich. Emus have a varied diet: they feed on grasses and leaves, fruits and insects. 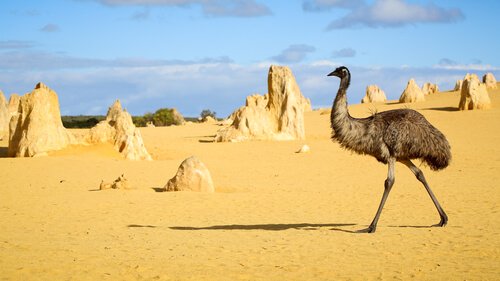 The emus are flightless birds that defend themselves with strong powerful kicks. Their name comes from the Portuguese word ‘ema’ which means large bird.

The cassowary is the heaviest flightless bird in Australia. A cassowary has black feathers on the body, but the neck and face is colourful. Cassowaries have a very low frequency call which almost cannot be heard by humans. 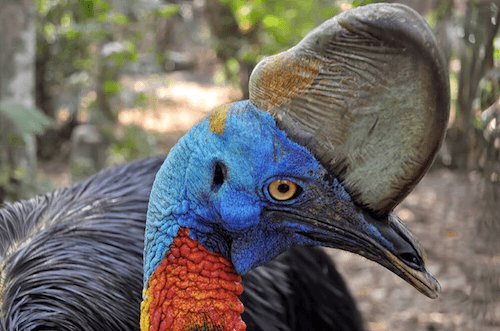 The cassowary has a casque, a sponge-like helmet which is covered with keratin. Keratin is the material our fingernails are made of. The cassowary is the most dangerous bird in the world as it has the most powerful kick. The foot has three toes with a dagger-like claw. The cassowary can run and swim very fast, so it easily can escape any dangerous situations.

Animals in Australia: The Sydney funnel-web spider is the world’s deadliest spider. The funnel-web spider injects a deadly poison whenever it bites and death occurs within an hour. However, an anti-venom has been developed and for more than 30 years there has been no fatality.

Australians are very aware of the danger of being bitten by a funnel-web spider, so they take precautions when hiking in the bushland or working in the garden. 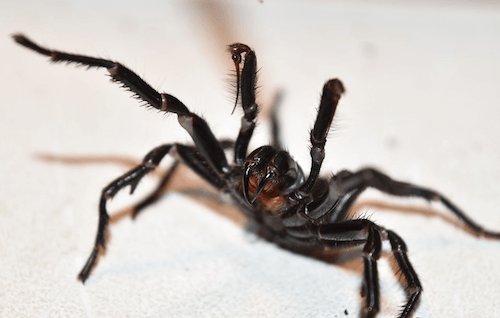 The big black spiders are hairless and the spider web looks like a massive funnel - therefore it is hard to miss! The webs can be spotted between logs and rocks along the Sydney coastline.

The Australian box jellyfish is the most venomous marine animal. The jellyfish with a box-like shape has long tentacles that inject poison when touched. The dangerous tentacles are up to 3 m/ 10 ft long. 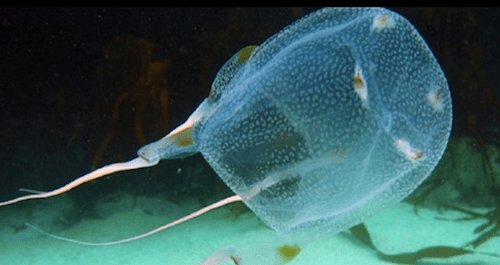 These jellyfish can swim in contrary to most other jellyfish that can only float. So make sure to stay out of the water if there are warning signs during jellyfish season in summer.

Crocodile Dundee told us about them in his adventures and we all know that there are crocodiles in Australia. 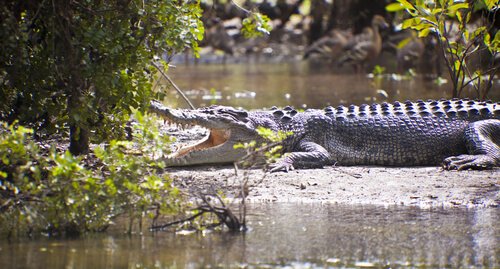 When waiting for prey, crocodiles can remain completely motionless for as long as an hour. When hunting, they lie either half-submerged in water or hide underwater. They can hold their breath for about one hour and have transparent eyelids, so they can see their prey even when underwater.

Along Australia’s coastline there are about 5,500 great white sharks. Great white sharks are not the largest shark species in the world, but certainly impressive. They can become massive, up to 7 m/ 23 ft in length - this is almost half the length of a basketball court!

Once a shark is fully fed, it can live without food for three month without any further meal. 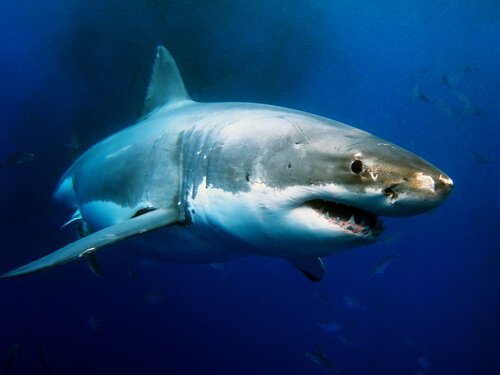 Sharks follow the vibrations in water when sourcing for prey. They have a very good sense of smell and can also detect the scent of blood from about 4.8 km/ 3 miles away.

Some of the world’s most poisonous snakes such as the coastal taipan can be found in Australia. Other dangerous Australian snakes are the inland taipan and the tiger snake. 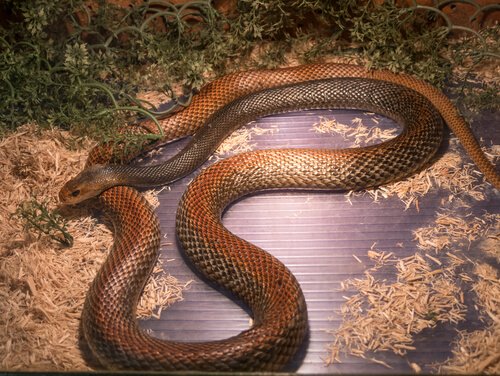 The coastal taipan grows up to 4 m/ 13 ft in length. However, don’t worry too much about encountering snakes in the wild. Snakes like to be left alone and they usually only attack when feeling threatened.

Animals in Australia: Less people die every year from snake bites or shark attacks in Australia than from bee stings! 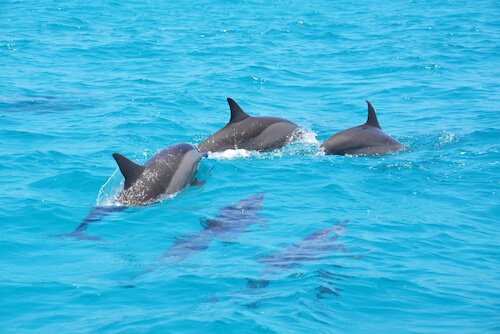 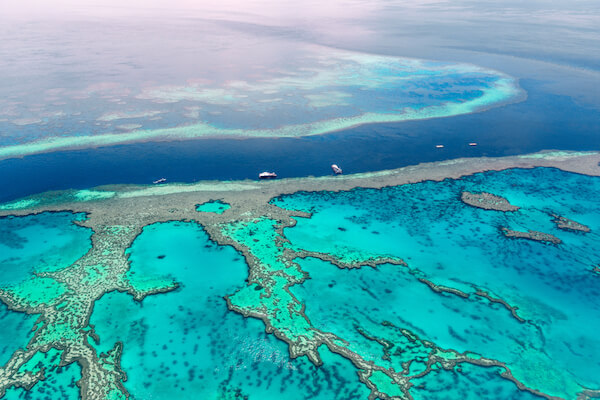 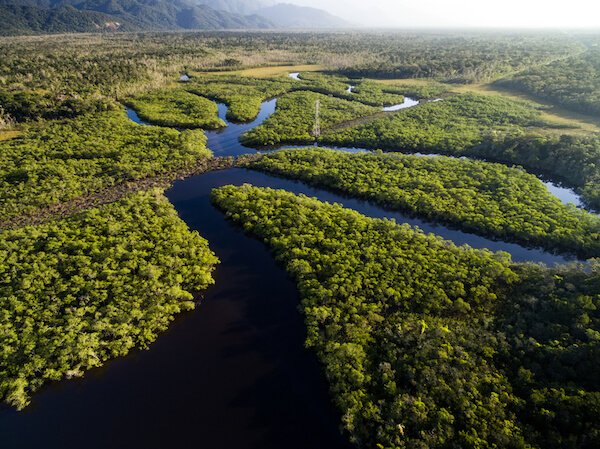 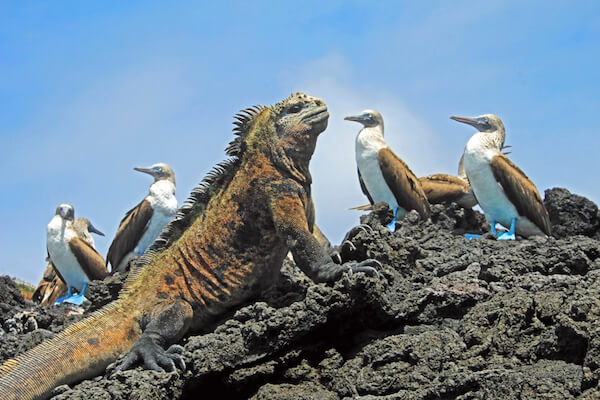 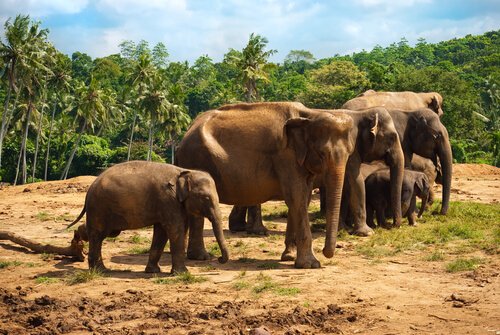 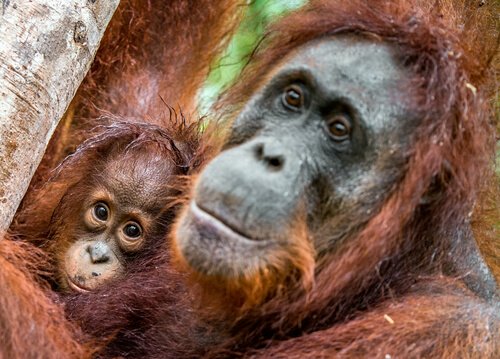 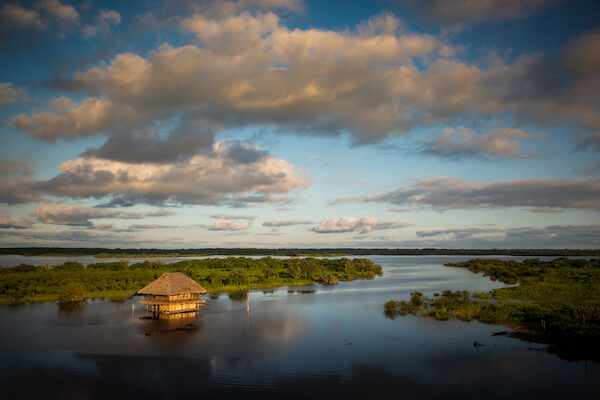 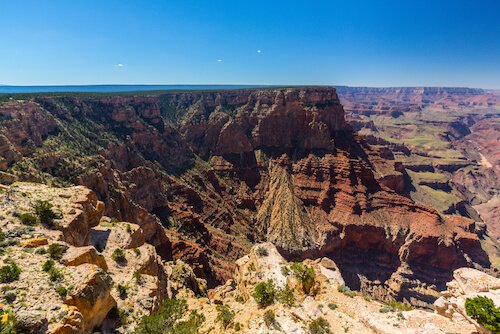