Do you know some amazing landmarks in Europe?

The natural landmarks and physical features as well as man-made attractions that we show below are well known for their unique locations, awe-inspiring natural features or outstanding design and architecture.

Europe houses 27 countries and there is a vast number of attractions and landmarks on the continent.

There are over 400 UNESCO world heritage sites in Europe with Italy being the leader in having the most UNESCO sites in Europe. Here are some of our favourite monuments and famous landmarks in Europe.

The following landmarks in Europe were chosen as they are attract a huge number of visitors to the region each year. All these landmarks are major tourist attractions in Europe and your kids will love to explore these sites with you. 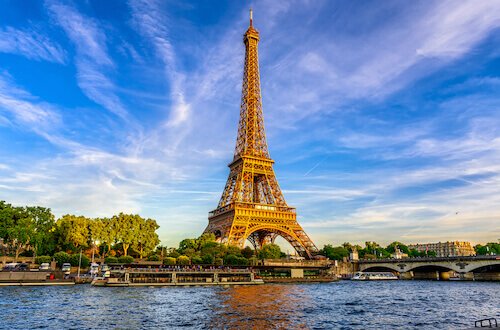 The Eiffel Tower is often referred to as the "Iron Lady" in the French capital Paris. The iron structure is 324 m/ 1,063 ft high. It was designed and built by Gustave Eiffel and his team for the Universal Exhibition of Paris in 1889. 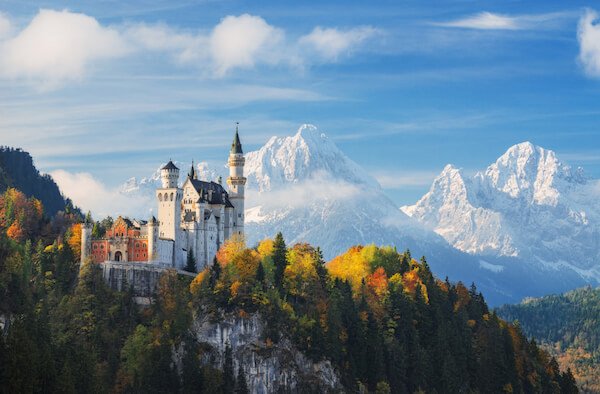 Neuschwanstein, is known as the 'fairy-tale castle' in the Bavarian Alps that was built high on top of a hill by the eccentric King Ludwig II. The king built the castle to honour the opera composer Richard Wagner and the name reflects on Wagner's most famous opera 'Lohengrin'. The castle was unfortunately only finished after the king had died in 1886.

3 | The Leaning Tower of Pisa in Italy 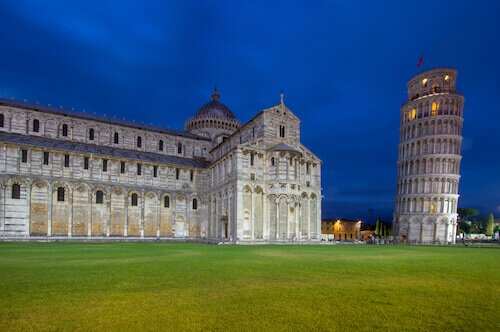 The famous leaning tower is actually the bell tower of the cathedral of Pisa. Bell tower means campanile in Italian. As the campanile was built on unstable ground, the tower began already to lean in the 12th century. The construction took almost 200 years and the tower was only finished in 1372.

4 | Stonehenge in the UK | Landmarks in Europe 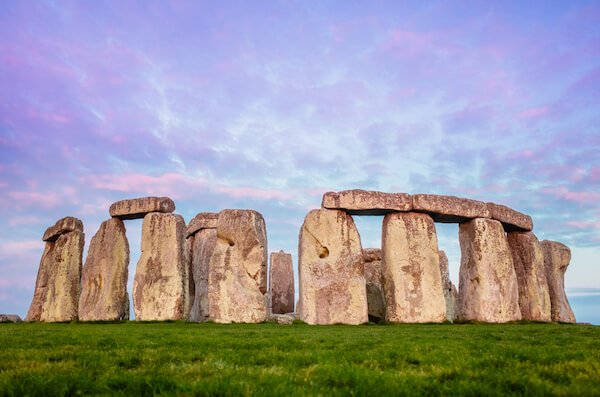 Stonehenge in southern England is a huge stone monument. The circles of stones shows 30 upright stones and  30 lintels. Lintels are the stones that lay horizontally on top. In the centre of the circle is one single tall stone. The monument was built over three stages and it is believed that it once was a gathering place for people during the Bronze age.

5 | Acropolis of Athens in Greece 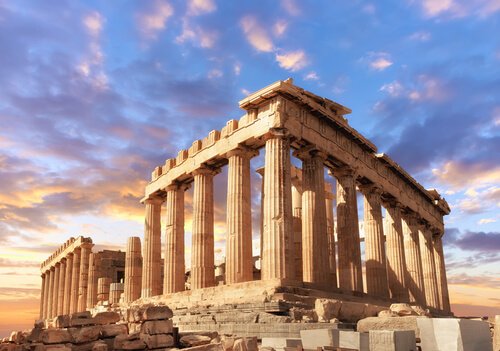 Parthenon Temple of the Acropolis

The ancient Acropolis dominates the city of Athens as it stands on a hill overlooking the city. The name 'Acropolis' originates from the Greek words 'acro', which means high, and 'polis', which means city. The Acropolis once was used as a fortress and religious centre. The famous ruins of the Parthenon temple were built in 447 BC and it was then the largest temple in the region. 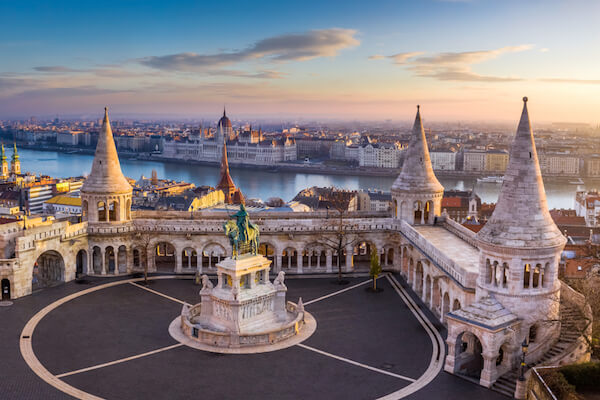 The Fisherman's Bastion is located high above the Danube River in Budapest. From the building's walls which are part of Buda castle one can admire the scenic panorama with the Hungarian parliament building across the Danube. The Bastion has seven stone towers that remind of the seven leaders of the Magyar tribes who founded Hungary in 895. 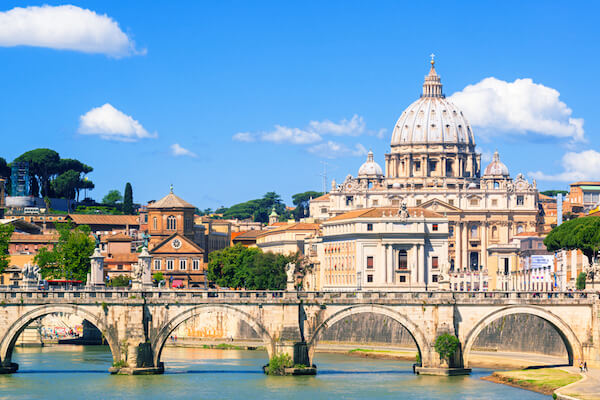 The basilica of Saint Peter is the main landmark of Vatican City. This Catholic church has the tallest dome in the world. The massive dome dominates the skyline of Rome, as Vatican City is an enclave in the Italian city. The papal basilica is the holy burial site of Saint Peter, one of Jesus Christ's apostles - according to the Catholic tradition. 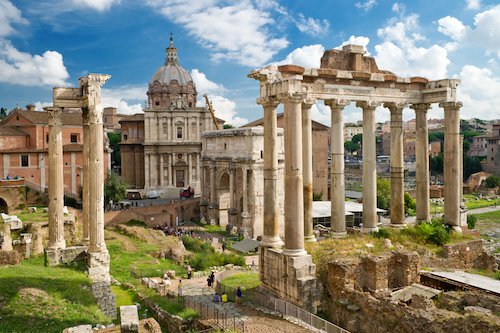 The monuments and ruins of the Forum Romanum (Roman Forum) are part of the most famous excavation site in the world. In ancient Roman this was the main meeting place and city square of the city. The oldest temples and structures date back to 500 BC. The oldest temple of the Roman Forum is the Temple of Saturn. 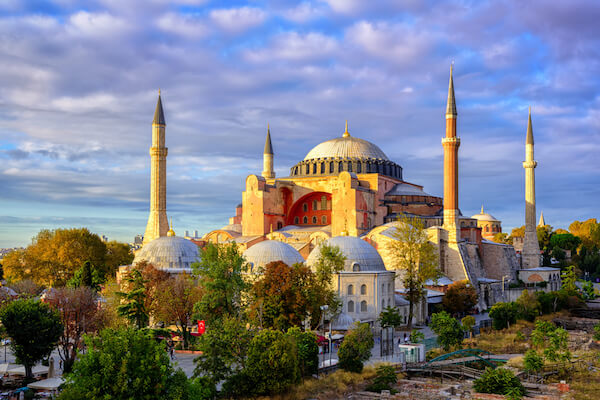 The Hagia Sofia in Istanbul was originally built by the Roman emperor Justinian I as a Christian cathedral in 532 AD. Thus the building shows mosaics of Christ, Mary and angels. In 1453 the cathedral was changed into a mosque when the Ottoman rulers took over Istanbul. From 1935 the Hagia Sofia was used as a museum and attracted millions of visitors every year. In 2020, the Hagia Sofia was converted again into the Holy Grand Mosque of Istanbul.

Geiranger Fjord is known as one of the most famous Norwegian fjords. The fjord landscape was shaped by massive glaciers. 'Fjord' is an ancient Viking term for 'where man travels across'. Glaciers, deep valleys with almost vertical cliffs, snowcapped mountains and numerous waterfalls are typical landscapes in Norway. 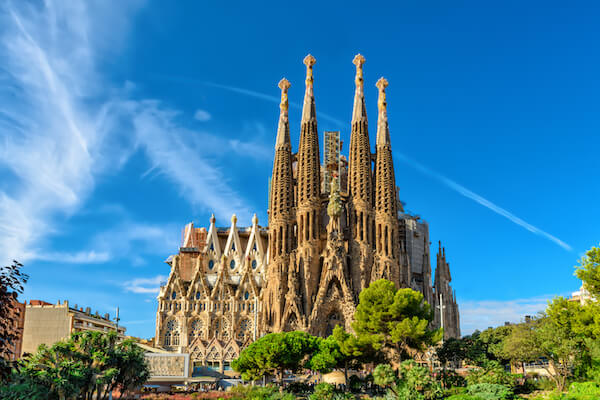 Work on the Sagrada Familia (Church of the Holy Family) began in 1884 and until now the building is not finished. Twelve of the eighteen towers of the church symbolise the twelve apostles. The highest tower represents Jesus Christ. This is the most famous projects of the Spanish architect and artist Antoni Gaudí. The building is planned to be finished in 2026, the centenary of Gaudí's death. 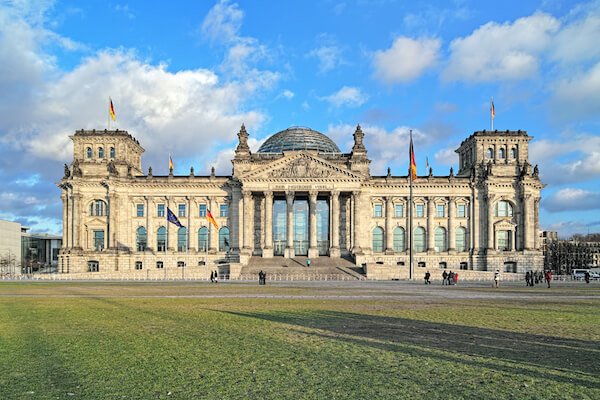 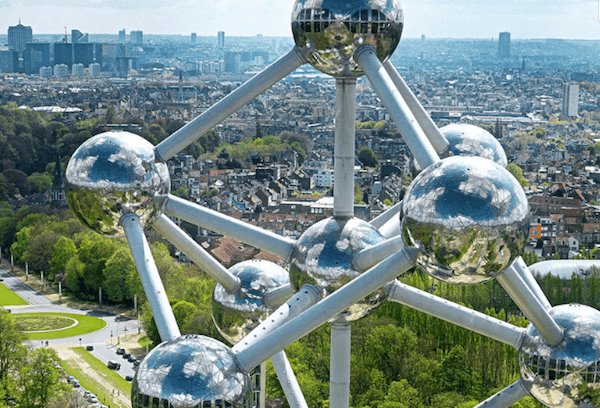 The massive structure overlooking Brussels was designed and built for the World Expo in 1958. The 102 m/ 335 ft tall aluminium structure has nine spheres that are connected. It represents the shape of an iron crystal which has been magnified 165 million times! Six of the spheres are open to visit, in there are exhibitions, a restaurant and viewing windows. 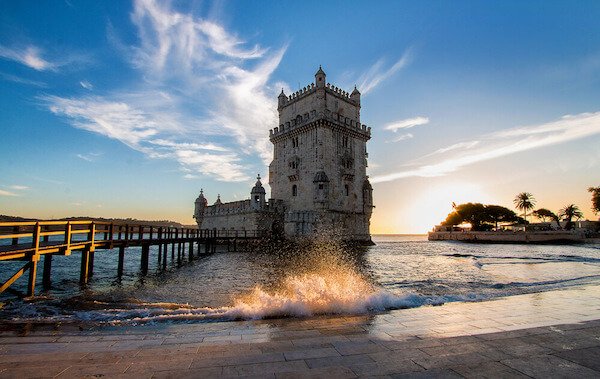 The Torre de Belém (Belem Tower) in Lisbon is known as the gateway to Portugal's capital city and also one of the wonders of Portugal. The isolated tower at the Targus River was built in the 16th century. Here was the start and end point when the Portuguese explorers started their journeys. The tower is four storeys high and is built from limestone.

15 | London Tower Bridge in the UK 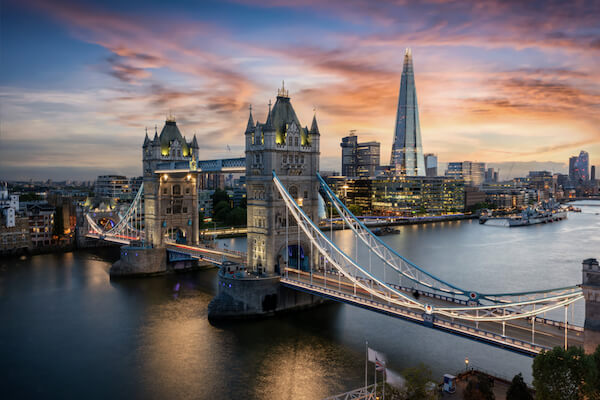 Tower Bridge over the River Thames in London

The construction of London's most famous landmark began in 1886 and took eight years. The Tower Bridge was then the largest bascule bridge ever built. The mighty bridge over the Thames works like a giant seesaw. Bascule means seesaw in French! Today, the bridge works with hydraulic power. 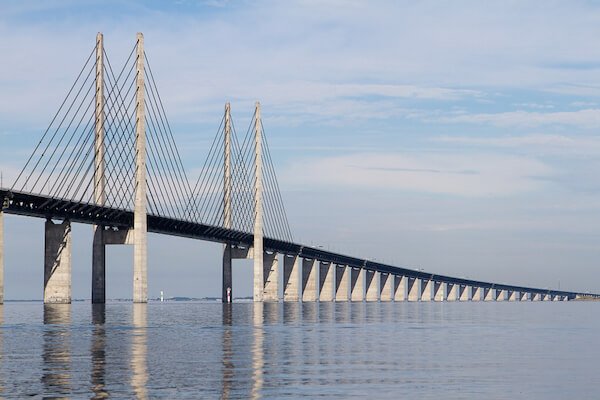 The Øresund bridge is the longest combined road and railway bridge in Europe. The bridge runs more than 8 km/ 5 miles over the Øresund Straits. The bridge links the Danish city of Copenhagen with the Swedish city of Malmö. The name of the bridge is spelt in Swedish as Öresund and in Danish as Øresund. 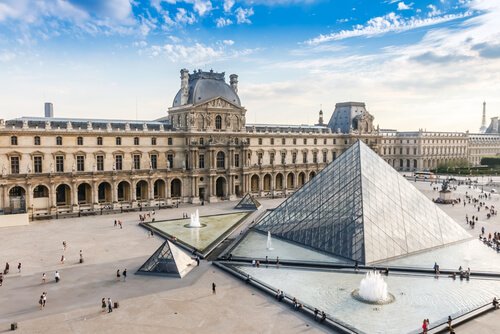 The Louvre in Paris is the largest museum in the world and houses more than 35,000 artworks. Among the most famous paintings in the Louvre museum is the 'Mona Lisa' painting by Leonardo da Vinci. The glass and metal Louvre Pyramid and the three little pyramids were added to the Louvre courtyard in 1989 by architect I. M. Pei. and have become one of the main landmarks in France since then. 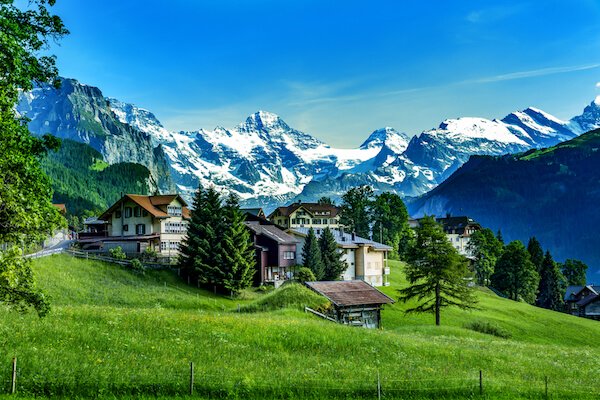 The Jungfraujoch is one of the most famous mountains in the Swiss Alps. Among other famous Swiss mountains is also the Matterhorn whose triangular shape was used for the logo of the 'Toblerone' chocolates. The Alps are Europe's highest and largest mountain range and stretch across eight European countries over 1,200 km/ 750 miles. 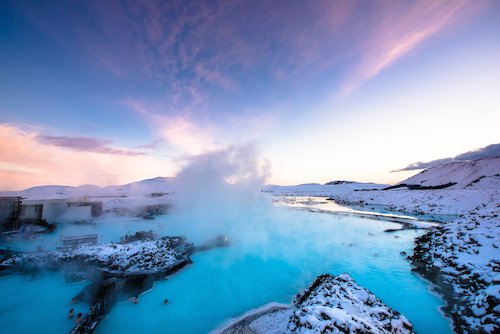 The Blue Lagoon in Reykjavik is the most famous attraction in Iceland. Millions of people visit the spa baths with the geothermal seawater every year. The water temperature in this spa is 39°C / 102°F all year round. The lagoon, which sits in the mids of a barren and volcanic landscape, was built in 1976 and is not a natural pool. 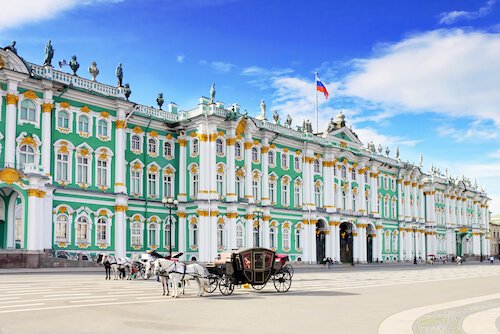 The Winter Palace in the city of Saint Petersburg was the residence of the Russian emperors until 1917. Saint Petersburg, a port city on the Baltic Sea, was founded in 1703 by Russian Tsar Peter I, who is also referred to as Peter the Great. The huge palace has over 1,500 rooms and houses today the State Hermitage museum. The palace sits on the banks of the River Neva.

Our page on Landmarks in Europe includes these resources:

Images on Landmarks in Europe: Shutterstock.com