In our passport facts for kids you will find lots of useful information on passports and visa, written for children by children.

When travelling abroad, the most important item to take along is the passport. Remember that for most countries your passport must remain valid at least until three (often six) months upon arrival in the foreign country and the passport usually must have at least two blank pages to allow border control to put their stamps in.

But let's start with some explanations and then read through our fascinating fun facts about passports.

Passport Facts: What is a passport? 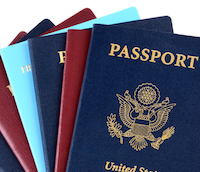 Nowadays, most passports include biometric data. This means when applying for a passport you have to provide information on your hight, eye colour and have your fingerprints taken and have a photo or scan of your face. This information is then stored on an embedded chip on the card or paper fixed into your passport. This feature helps to avoid criminal activity as it is a deterrent of identity fraud.

Countries allow foreign people to cross their borders and grant access to their 'territory' when these foreign visitors show their passports to border officials. Usually passports do not automatically allow entry and often special visa have to applied for either before travelling or on arrival when presenting at a foreign country's border control.

For immigration control many countries add entry and exit stamps onto the passport pages. See some stamps below. Can you find out which countries issued the stamps? 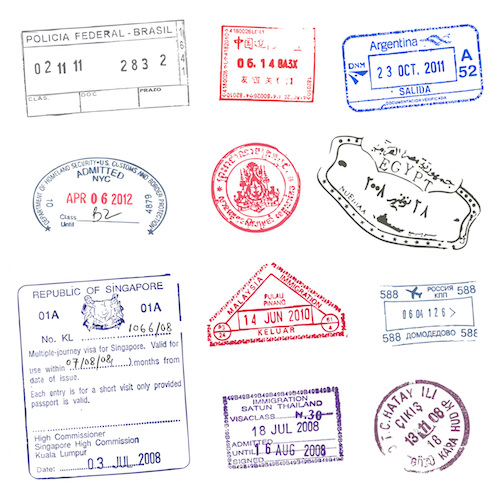 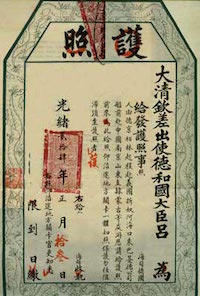 Interesting passport facts: To ask for permission when travelling to foreign places is a very old custom that dates back as far as 450 BCE. Then the Persian king provided granted leave to travel across foreign land to one of his servants.

The first official travel documents were however issued by the British in the 16th century. King Henry V of England, provided the first regulations concerning travelling citizens. If people then could not show their documents when passing through a city's gate or when passing posts while travelling through the land, they could even face exile!

As mentioned above, many countries require not only a passport but also a visa for entry. Visa are often to be applied for before travelling and when entering the country, stamps are issued into the passport to show entry and validity dates of the visa. 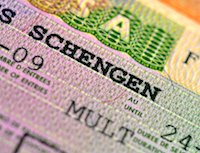 Some countries, such as the countries belonging to the European Union, issue a visa which is valid for all the participating countries. The EU countries' visa is called Schengen Visa.

Did you know that for entry to the USA, there are 20 visa types available? The category people have to apply for depends on the purpose of the travels. Foreigners who want to visit the country for a holiday travels will need to apply for a different visa than people who come to the USA to open a new business or students who plan to take up studies at one of the American universities.

However, some stamps are really tricky! So precautions have to be taken by some international travellers. If they want to travel to China, they better do not visit Nepal before. Visitors to some Arab countries might not be welcome if their passport shows a stamp from Israel.

Dual citizenship is when people are a national citizen of two countries and thus hold more than one country's passport. Often this is the case if a child is born to parents of different nationalities or sometimes also if a child is born in a country that is not the home country of the parents. Sometimes the child might be able to obtain a passport of the country where it is born even if both parents are not citizens of this country such as when children are born in New Zealand or the USA, they can automatically claim citizenship in these countries. This special status is only allowed in some countries but is not supported in all nations.

Well, also in different countries, different rules apply! So always make sure which passport is needed for your travels should you be lucky enough to be citizen of more than one country.

Interesting passport facts: Remember, that usually passports expire after a period of ten years and thus need to be extended in time prior to your travels. Sometimes passports are valid a more limited time, such as for German children's passports which have to be renewed at the age of 6 and from 12 years, children need to get a regular German passport. Make sure to know which regulations apply in your country!

Image Credits for Passport Facts page: Shutterstock and own images