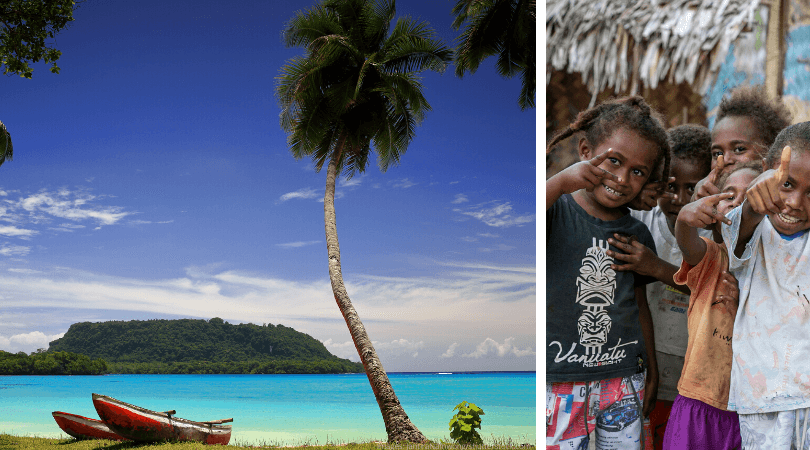 Here are some interesting facts about Vanuatu which were chosen and researched especially for kids.

1. Vanuatu is located in the South Pacific Ocean in Oceania. Vanuatu is an archipelago of about 80 smaller islands, 65 of these are inhabited.

2. The Republic of Vanuatu belongs to Melanesia, which is is a region in Oceania. Vanuatu is the smallest country of the five independent countries in Melanesia. - The other four countries are Fiji, East Timor, Papua New Guinea and the Solomon Islands - parts of Indonesia and French New Caledonia also belong to Melanesia. 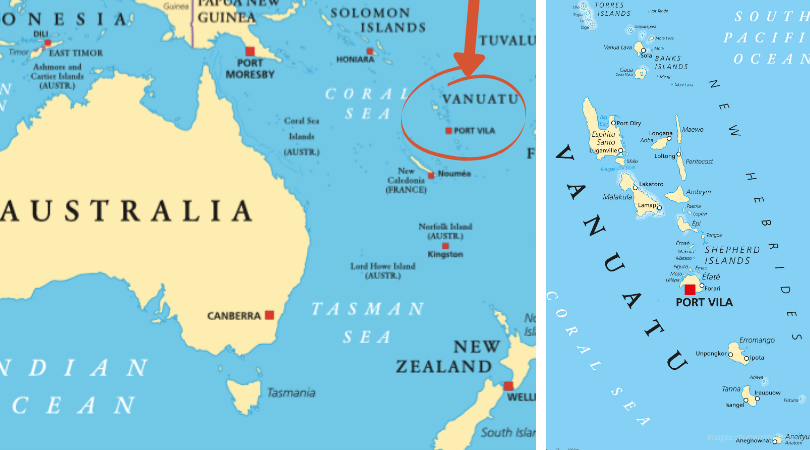 Maps of Vanuatu and her islands

3. The Melanesian country of Vanuatu is located in the Pacific Ocean. The name Vanuatu comes from the two Melanesian words vanua meaning 'land' and tu meaning 'to stand or to remain' and symbolises the independence or belonging to 'our land'. Independence day of the Republic of Vanuatu is celebrated on 30 July.

4. The three largest islands of Vanuatu are called Efate, Espiritu Santo (also referred to simply as Santo) and Malakula. There are only two bigger cities which Port Vila, on Efate island, and Luganville, on Santo island.

5. The capital city of Vanuatu is called Port Vila is also the largest city of the country with about 53 000 inhabitants. 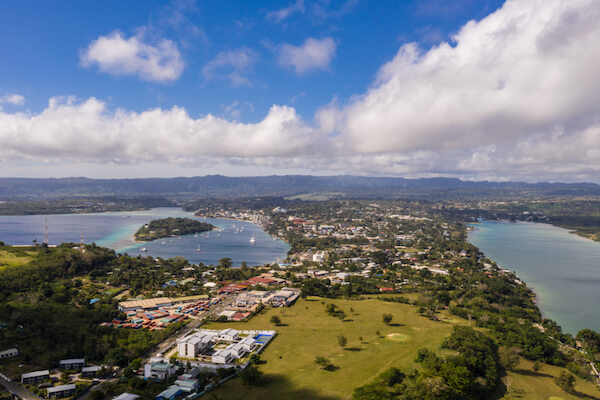 Aerial view of Port Vila, the capital city of Vanuatu

6. Vanuatu was first inhabited by Melanesians as far back as in 2000 BC. In the 15th century, the islands were visited by various explorers and later settled by British and French settlers.

British explorer James Cook named the islands "New Hebrides" in 1774. In the 18th and 19th century British and French missionaries, farmers and planters settled on some of the islands. In 1906 the New Hebrides became part of an Anglo-French condominium. The archipelago gained independence in 1980, changed the name into Vanuatu and joined the Commonwealth.

7. About 300 000 people live in Vanuatu, the vast majority (82%) of the people are Christians. The citizen of Vanuatu are referred to as Ni Vanuatu or Ni Van. 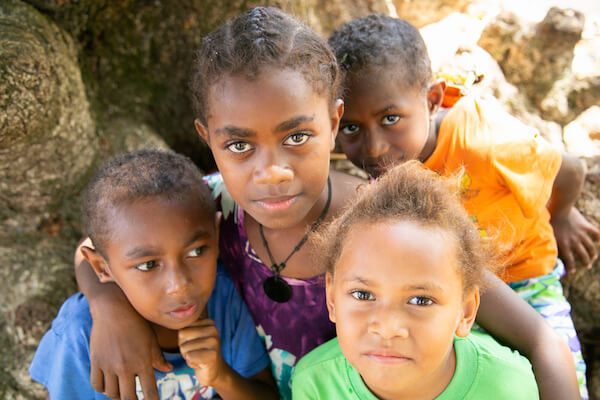 8. The national languages of Vanuatu are Bislama, English and French. Bislama is a Creole language and spoken by all Ni Van either as first or second language.

The national anthem of Vanuatu is in Bislama and called "Yumi, yumi, yumi." Yumi means 'we' in English.

9. Most people on the Vanuatu islands work in the agricultural sector. Fishing and tourism are also among the main income sources. 87% of the Ni Vanuatu people can read and write.

About 300 000 tourists visit Vanuatu every year, about the same number of inhabitants on islands! Most tourists visiting Vanuatu come from Australia and New Zealand. Many come for the scenic landscape, traditional island living, sandy beaches and clear blue lagoons.

10. The highest mountain of Vanuatu is called Mount Tabwemasana and is 1879 metres/ 6165 ft high. The mountain is located on Espiritu Santo island. 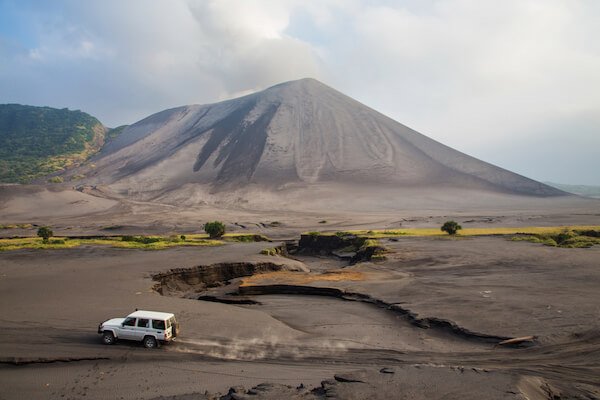 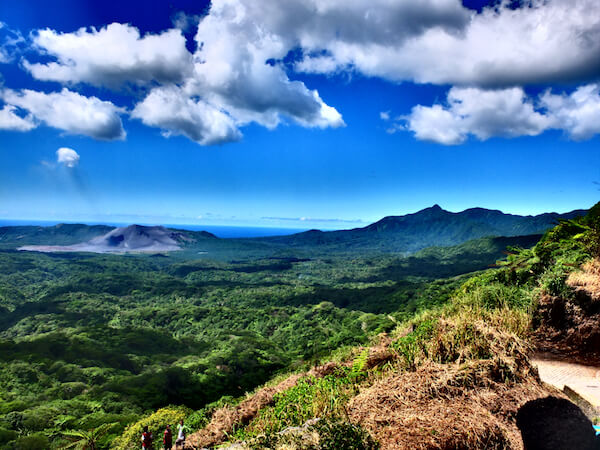 11. Vanuatu is also known for its dense rainforests. Home to flying bats, Vanuatu has an endemic bat species, the flying fox. They are important for pollinating the native trees and are important for the rainforest. There are about 180 bird species in Vanuatu, among them the colourful rainbow lorikeet. 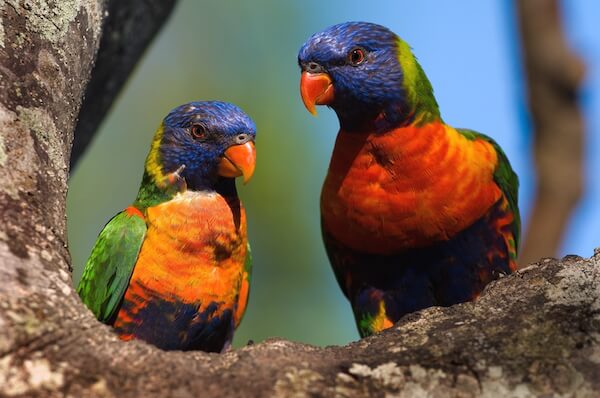 12. The currency of Vanuatu is called Vatu. 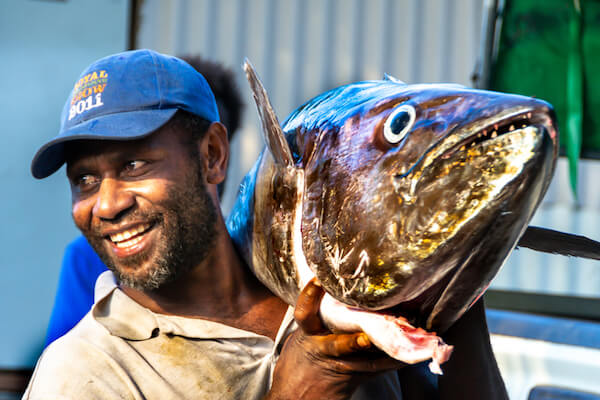 The main agricultural products also include tropical fruits such as pineapples and bananas, cabbage, vanilla, cocoa, coconuts, and yams or taro (which is a starchy root vegetable). 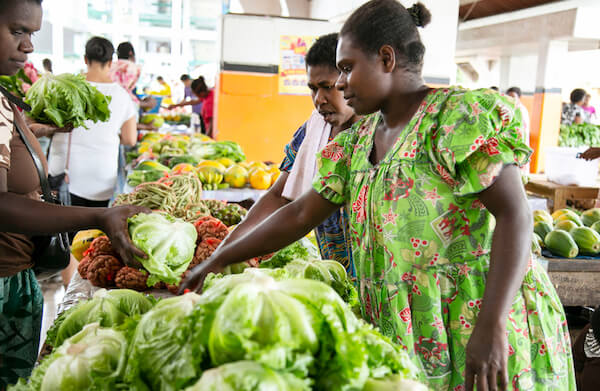 At the Market in Vanuatu

14. Vanuatu has a tropical climate with two main seasons. The colder months are from May to September. The months from October to April are hot and humid. December to April are the most rainy months, sometimes with cyclones. 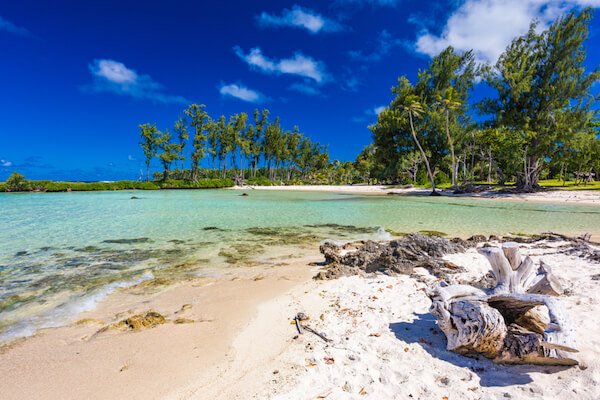 15. Food in Vanuatu includes the different fruits and vegetables grown on the islands. Coconuts and coconut milk is used in many dishes. Food is mostly steamed or cooked over fire and rarely fried.

Lap-lap is considered by many the national dish of Vanuatu. 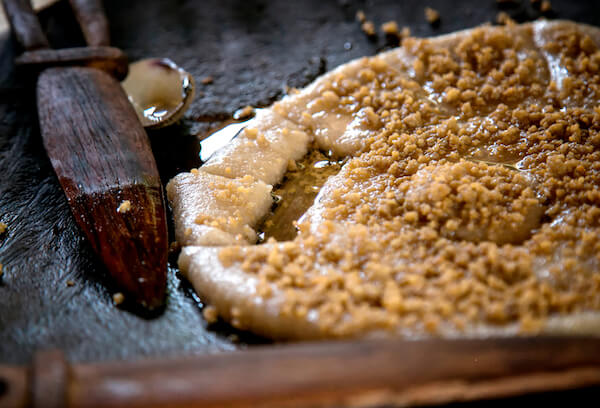 Lap-lap is baked in banana leaves. This Vanuatu dish is made by grated root vegetables such as taro and yam. The paste of the grated roots and mashed bananas are then made into a dough which is then covered by coconut milk and cabbage and more dough layered on top. Sometimes cooked meats such as beef or pork or fish is then added on top as well before baking the whole wrapped dish in a rock oven.

Image Credits on Facts about Vanuatu: photo stock from shutterstock and wikicommons, if not otherwise stated.

We hope you enjoyed reading our Vanuatu Facts. Please bookmark this page and spread the word. We will add more information in the near future.

Back from Vanuatu Facts to Kids-World-Travel-Guide 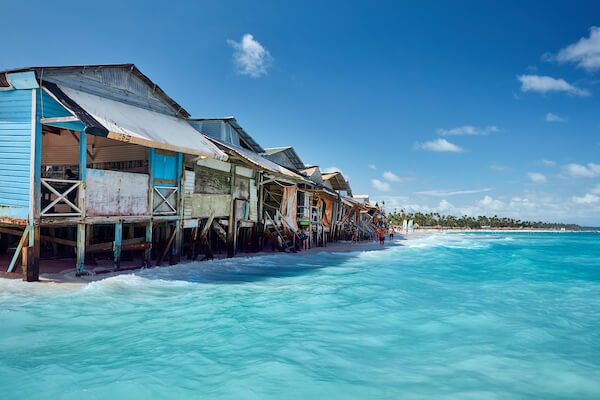 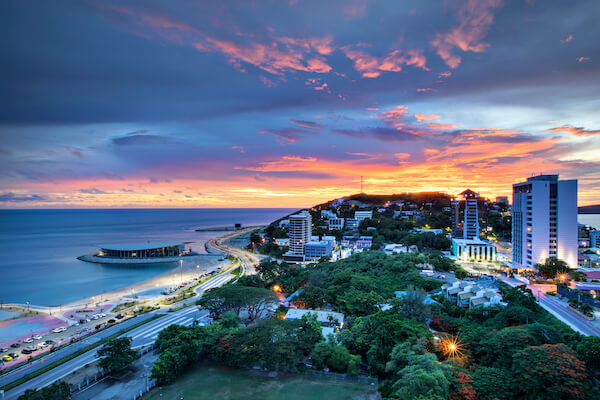 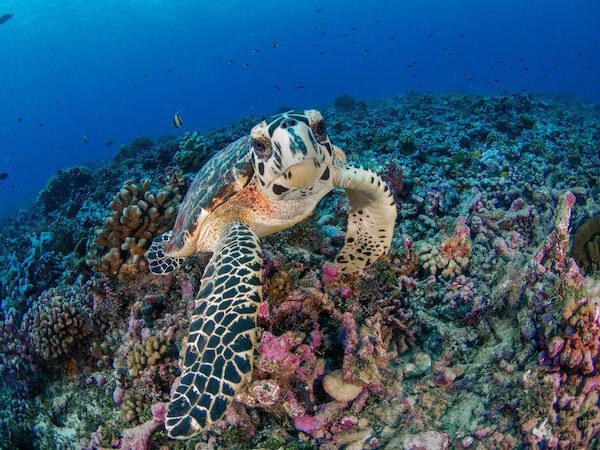