Our solar system consists of eight planets which all orbit around our home star, the Sun. 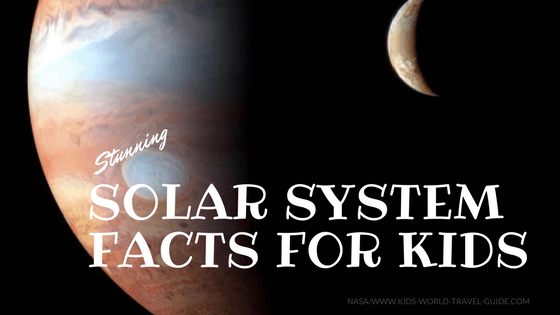 In the image is Jupiter and one of the moons - image taken by the Juno space craft, a NASA space mission

Our planetary system was formed 4.6 billion years ago!

For most of history it was thought that everything in space moved around the Sun, however around the 17th century the idea, that the earth is just one of the planets in the system, started gaining popularity.

In fact, the Sun is only one of more than 200 billion stars moving about in the Milky Way!

Our solar system consists of eight planets which all orbit around our home star: the Sun.

These eight planets are:

Solar System Facts
What you should know...

The closest planet to the Sun is only about as wide as the Atlantic Ocean! 18 Mercuries would fit into the Earth. The planet does not have an atmosphere, just like it is on all the other planets. There is no water present on this dangerous planet either! There temperatures vary between -180°C and 430°C/-290°F and 842°F. 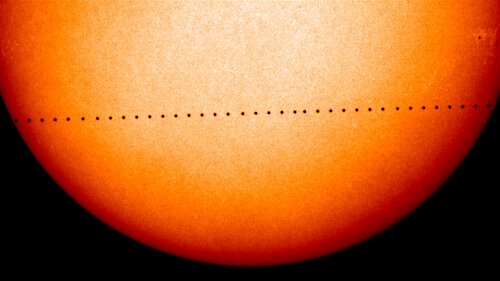 This is also the fastest planet! It speeds through space with 50km per second/31 miles per second.

The BepiColombo mission was launched in October 2018 and now travels in space towards Mercury which it will reach by 2025. It will orbit the planet to solve mysteries about Mercury. It also will hopefully reveal questions like how planetary systems form.

Venus - named after the Roman goddess of beauty - is also known as the evening or morning star. Yellow clouds made of sulfur and sulfuric acid cover the entire planet causing light to reflect off the surface.

This makes Venus the second brightest object in the night sky after the Moon. 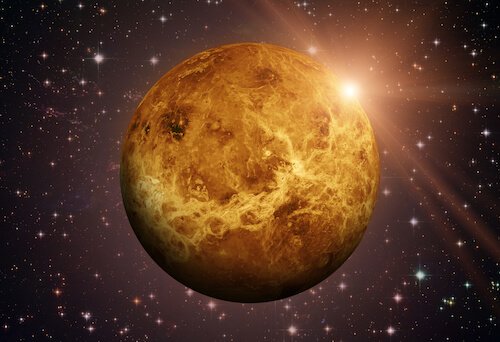 Venus is very similar to Earth in terms of size and material.

However, it is the hottest planet in the Solar system with temperatures reaching 460°C/480°F. The surface of Venus hosts thousands of volcanoes, craters and super-high mountain ranges.

Many missions have been conducted about Venus but many questions remain. The Soviet Union successfully landed eight space probes on Venus during the 1970s and 1980s.

If the International Space Station is in the sky, it will be brighter and easier to see than Venus! The space station looks like a very bright star! Find out how, where and when you can spot the space station.

Earth is the fifth largest planet of our solar system and has one large natural satellite, the Moon.

Did you know that all planets were named after Roman and Greek gods and goddesses, except the Earth. The name 'Earth' nevertheless is more than 1,000 years old and means just 'ground'. 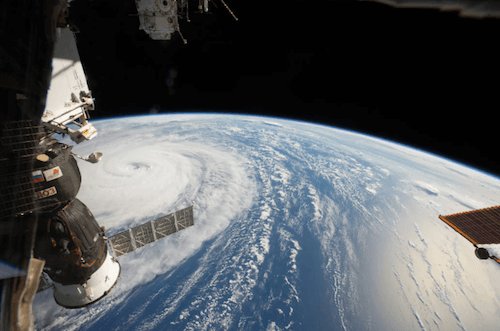 Image from Space shows how the Super Typhoon Noru formed

Everything one ever knows is here. This is the only place where life is known to currently exist. Most of the Earth's surface (about 70%) is covered with water.

Mars, the most likely candidate for a future human habitat, is affected by huge dust storms that occur every now and then and cover the entire planet!

Mars is very cold and dry but water exists in form of ice at the North and South poles. The surface of Mars has many craters, deep valleys and volcanoes.

The largest peak on the red planet is a volcano called Olympus Mons, which is three times higher than Mount Everest, the highest mountain on Earth. 'Mons' is the Latin word for mountain. 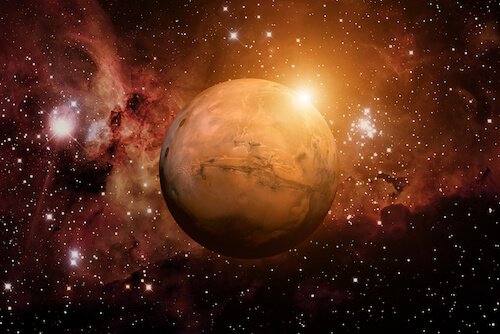 Mars has two moons called Phobos and Deimos, both are probably asteroids which were caught up by Mars’ gravitational field.

There are two rovers on the surface of Mars and six spacecraft orbiting Mars that are tasked with discovering the presence of water and searching for evidence of previous ancient life, amongst other things.

Jupiter is the largest planet in the solar system. The most famous feature on the surface of the planet is the 'Great Red Spot' which is actually a storm that has been blowing for about 350 years, if not longer. 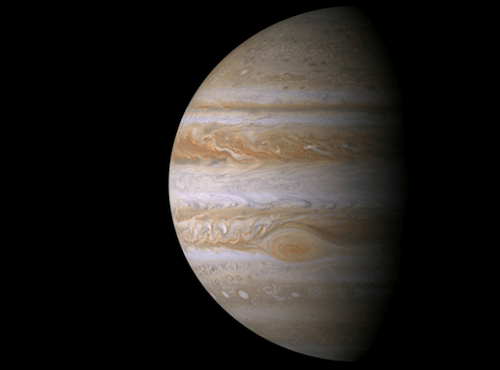 Jupiter has some of the largest moons in the solar system and one in particular, Europa might be able to sustain life in an ocean below its icy surface.

There is one spacecraft currently orbiting Jupiter called Juno. Juno is trying to solve how the planet formed and finding out more about the winds that occur.

Saturn is a gas giant just like Jupiter, Neptune and Uranus. This means that it doesn’t really have a proper solid surface as it is mainly made up of gases with a small rocky core.

Saturn is the second largest planet and is known for its rings, although the other gas giants also have these kinds of rings, only Saturn’s rings can be seen the clearest. 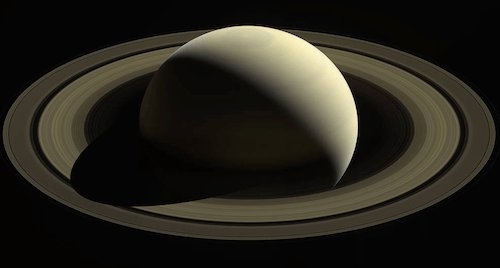 Saturn’s moon, Titan is the second largest in the solar system.

In 2005, NASA and ESA (European Space Agency) landed a space-probe called 'Huygens' on Titan revealing the composition and the landscape of this moon. This spacecraft was part of the Cassini-Huygens that recently ended when the orbiting spacecraft Cassini was intentionally crashed into Saturn. Cassini showed us that another moon of Saturn, Enceladus is also potentially habitable.

Uranus is the second furthest planet from the Sun and therefore also has to travel a pretty long time to go once around out home star. It takes Uranus roughly 84 years to orbit once around the Sun. 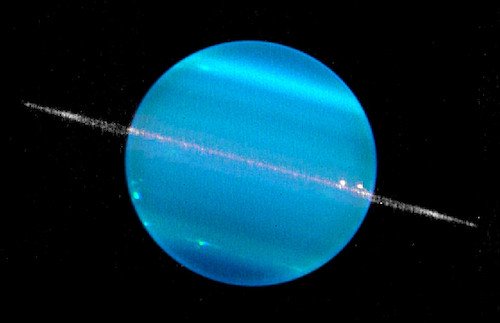 Uranus looks blue because of its gases

Uranus is a blue planet, not because of water, but because of gases that make it appear blue.

Uranus orbits on its side, which means that its seasons are completely different to ours. Summer and winter each take 21 years at the north and south poles! 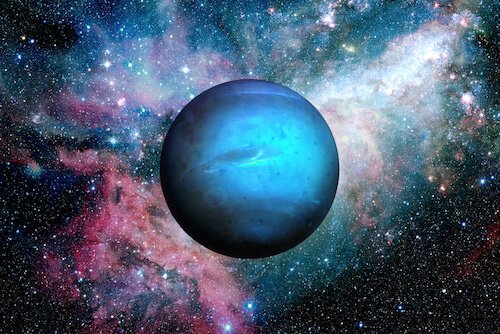 Neptune is closely related to Uranus, the atmosphere is composed of almost the same gases and just like Uranus, Neptune also appears blue. Neptune inherits its name from the Roman god of the sea as reference to its deep blue color.

Neptune is the furthest planet from the Sun and it takes 165 years for Neptune to go once around the Sun.

No space probes have ever visited Neptune or its partner Uranus but a fly-by was made by the space probe Voyager 2 in 1989.

Click on the image below to go to our new solar system quiz page. 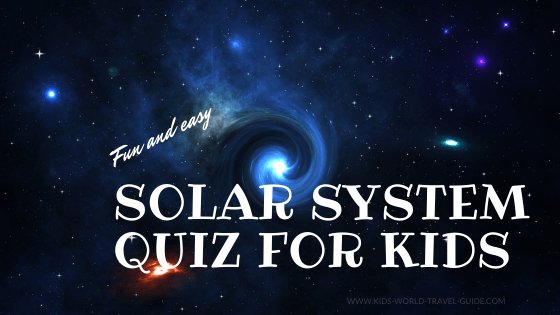 Do not forget to read our geography intro and some basic geography facts on our page: 'What is Geography'. There are some pretty awesome facts and another fun quiz about geography for kids.

Useful Resources for Geography:
About the Planets

More about our planet

Browse our sections for specific topics or scroll down to our geography quiz section.

Images on this Solar System Facts page: NASA and shutterstock.com

There is more to know about our Solar System! 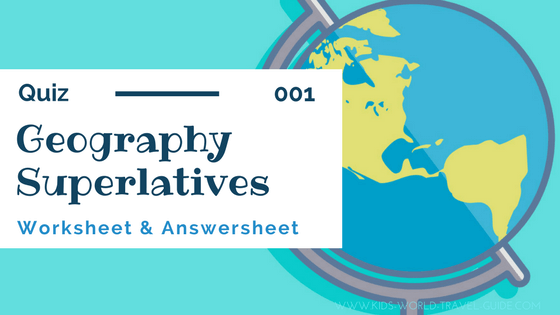 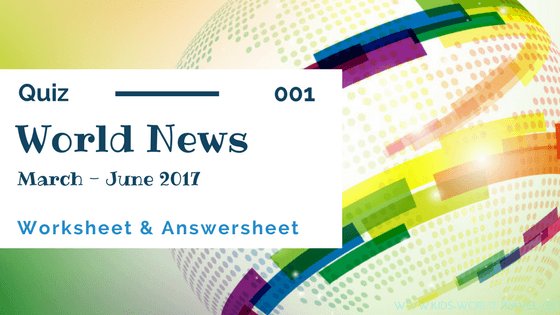 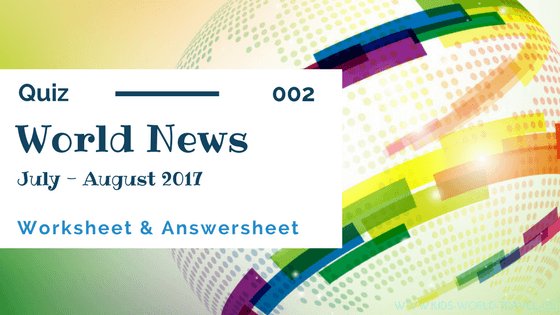